It has been a very difficult 6 months for the world: war, famine, climate catastrophe, inflation - and it's not over yet.
The SIPP Portfolio is down: no surprise there! 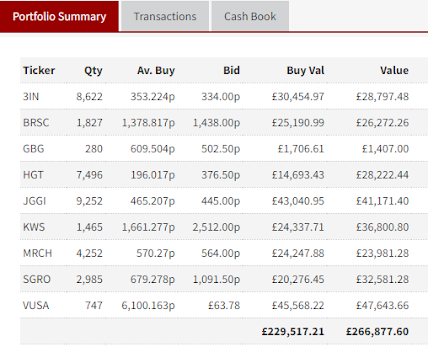 Value of Equities = £266,877.60
Value of Cash = £4,186.22
TOTAL = £271,068.82
On the 1st January, the total value was at £309,757 and in the previous 4 months (1st Sept - 31st Dec) UK equities had been looking flat: no impetus, and nothing on the horizon to produce a better return.  In hindsight, I should have trimmed back at least my UK equity exposure.
Selling Diploma (DPLM) for an average of 2900 in January was a good move, as the SP dropped below 2250 and now looks to be on a recovery mode. And selling GB Group (GBG) for an average of 695 was another good move, as the SP dropped to just under 400 in early July. This is another company that "could" be on a recovery mode, but looks very cheap now and ripe for a takeover bid.  It's highly likely that I will take-up shares in both of these companies in August.
Posted by Wayward Lad at 18:05

This blog is simply a "diary" of my trades. I will detail what I've bought or sold, and provide a brief explanation why. You should be aware that Pension Builder (http://PensionBuilder.blogspot co.uk) is not a share "tipping" site. I will make no recommendations to buy or sell shares as I am not regulated to do so by the FSA. I will simply state what I have already bought or sold personally. I am simply a private individual who is recording the trades made on his personal SIPP. You should ALWAYS do your own research and come to your own decisions on share trades. If you follow my trades and lose money, you only have yourself to blame and not me.

Wayward Lad
Life-time lover of horse-racing and gambling in general. I remember the days of the extel commentary in the bookies. I grew up bunking-off school to watch the likes of Nijinsky win the Derby (in 1970). Was there myself to watch Dancing Brave in 1986. Then lived in Hong Kong for a while (1990-97) and produced my own form-book and ratings there (as the local form was written in Cantonese); that meant I learnt a lot about horseracing there. Signed-up to Betfair (was with Flutter before that) in Dec 2001. Should make more money at racing than I do, but have tendency to waste winnings on silly wagers. I have moments of inspiration but never the conviction to follow them through.